Peace is the glue that ties your sprit to your soul, your soul to your body, and your body to your health. If you don’t have peace, you’ll never experience optimal health.

Former Miss America, Cheryl Salem, and her husband Harry Salem join Dr. Mark Sherwood in this episode to uncover how to bring lasting peace in your life despite circumstances.

In this episode, you’ll discover:

About our Guests: Harry & Cheryl Salem 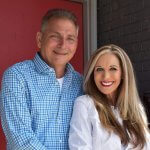 Harry and Cheryl Salem are ministers of the gospel. They are parents to sons, Harry III and Roman. Roman has married a beautiful young lady, Stephanie, and she has become their daughter-in-love. Healing and restoration have come full circle for the Salem family with the miracle birth of Roman and Stephanie’s baby girl, Mia Gabrielle. She is named for their daughter, Gabrielle Christian, who is in heaven since 1999. Their latest joy will be arriving in March 2017 with Roman and Stephanie’s second miracle baby of restoration for the Salem Family!

The Salems have seen the altars flooded with people receiving salvation, with countless re-dedications, with miraculous healings and with bodies, lives, marriages and souls being restored because of His mighty anointing!

Cheryl was crowned Miss America 1980, but tremendous adversities nearly ended that dream before it began. As a young girl, she survived a horrific car crash that cracked her back and crushed her left leg, resulting in a physical handicap and over 100 stitches in her face.

Eleven years old, poor, crippled and scarred… but a miracle, too! This was the outlook Cheryl chose, as she had been told that she might not ever walk again. But walk, she did! And she walked the runway in Atlantic City, against all odds, all because of Jesus.

Harry’s father passed away when Harry was 10 years old, leaving him with a mandate to be the man of the house, to never cry, and to take care of his mother and sisters. This challenge caused Harry to excel, but to also grow up with a cautious outlook on life.

He quickly made a name for himself in the corporate world, becoming a major executive before the age of 30, but he knew that there was more. He and Cheryl met, married and started their family, but it wasn’t until the mid-nineties that Harry had an encounter with God that changed him forever. He let go of the pain of growing up without his father and the stress of the mantle that had been placed on his shoulders at such a young age. He began to trust God – and he has never looked back.

Cheryl has recorded numerous music CDs, the latest being I Am A Worshiper. The most popular worship music she has released over the past few years are the four prophetic CDs of healing and restoration. Her prophetic flowing style on both the keyboard and vocally of the Book of Revelation and the Book of Proverbs are fast becoming the most requested music CDs! She and Harry have co-written 36 books with topics ranging from Mourning to Morning to Entering Rest – Be Still. Their book, We Who Worship, is designed to bring the reader into a deeper level of purity and intimacy with God in worship. Their marriage books Two Becoming One and Don’t Kill Each Other! Let God Do It! are great books for couples to read and are also used for couples Bible studies together.

Salem Family Ministries presents We Who Worship Gathering annually, a worship event, which includes worship, dance, art, musical theater and drama. They are walking out the Lord’s plan set before them for School of Worship, intensive training sessions, where the Salems teach, impart, and personally work with students to help them grow to the next level in their worship life and ministry.

Both Harry and Cheryl are sought-after ministers, who speak in churches and events across the nation. Harry has a heart for men, preaching and teaching on overcoming issues in life. Cheryl is a popular preacher at ladies events, encouraging women to reach their godly potential, but the focus of Salem Family Ministries is to take this unique, tag-team style of ministry into churches, two by two, to reach families for God, one by one.

Never miss an episode. Subscribe for free on your favorite podcasting app: