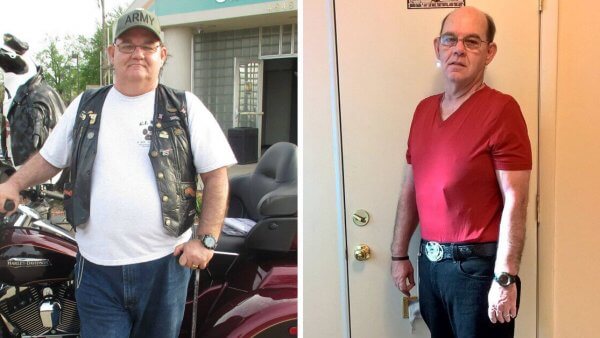 Kelly had struggled over the course of several years with his weight after having back and neck surgery. Unable to do much in the way of exercise and on required medications through the VA (18-year Army combat veteran), he was left increasingly frustrated as he approached nearly 300 pounds.

After going back and forth with the VA over the issue of back pain, they put him in their “MOVE” program to assist him in losing weight. He did lose some, but the pain was still excruciating since he suffers with degenerative disc disease. Their only solution was that they’d send him for bariatric gastric surgery. But, that didn’t seem like a good solution to him or his wife.

Kelly’s wife was watching the news and saw Dr. Michele and I on television speaking about DNA testing. Having been a strong proponent of a more natural approach, she was intrigued and looked up the information online and decided to present it to Kelly as an alternative. Fortunately, he agreed to check it out.

At his first appointment, I realized Kelly and I had met previously. The common ground helped him jump into our wellness program with both feet. The task of intently paying attention to the food he put in his body was a bit frustrating at first, but he eventually seized the nutrition plan with both hands. Once he received his DNA results, he was a man on a mission.

When he started dropping the weight and inches, excitement kept driving him forward. Then came the shopping trips as his clothes became too large and he couldn’t punch any more holes in his belts. He was still hesitant to buy new clothes, however, until he had his last back surgery.

The back surgery turned into back surgeries – there were four in less than six weeks. Despite it all, his weight dropped to 170 pounds; now needing to add weight on! He’s now happily at around 185 and thrilled to remove all the larger clothes in his closet.

The size 36-48 pants were donated and he replaced them with size 34s that even fit over his back brace. Now, he is looking forward to the day the doctor releases him to ride his Harley again.